The method is standardized by international bodies such as
the ICC, AACCI, ISO and ASBC in the standards:

What is sprout damage?

Under conditions of prolonged dampness or rain, grain kernels may start to germinate, or sprout, when the crop is still standing. Germination begins when kernels absorb water and generate enzymes that break down stored starch and protein in the endosperm. The enzymes release sugars from starch and amino acids from proteins which nourish the growing embryo.

Alpha-amylase is one of the enzymes produced in the sprouting kernel. Although some alpha-amylase enzyme is present in the embryo or germ of sound wheat kernels, when germination begins the embryo and layers surrounding the starchy endosperm produce the enzyme at an accelerating rate. A severely sprout-damaged kernel contains many thousands of times the amounts of enzyme present in kernels that are in the early stages of germination. Because of this, a wheat sample containing very low levels of severely sprouted kernels may exhibit significant amylase activity. Alpha-amylase converts starch into sugars in the sprouting kernel, and similarly breaks down the starch granules in wheat flour when mixed with water to make bread dough.

The Falling Number® method is standardized and should always be performed in the same way. The steps are described below, and are also illustrated in the picture.

To learn more about the theory behind the Falling Number® test, click here. 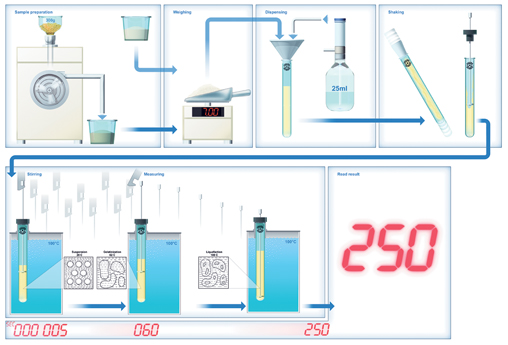 1. Sample Preparation
For grain a 300 gram sample is ground in a Laboratory Mill LM 3100 or LM 120 equipped with a 0.8 mm sieve. The large sample is to avoid sampling error. For flour a representative sample is taken.

2. Weighing
7.0 ± 0.05 g of whole meal or flour is weighed and put into a Viscometer tube. The flour amount should be moisture corrected by measuring the actual moisture content of the sample.

4. Shaking
Sample and water are mixed by vigorously shaking the tube to obtain a homogeneous suspension.

5. Stirring
The Viscometer tube with the stirrer inserted is put into the boiling water bath and the instrument is started. After 5 seconds the stirring begins automatically.

6. Measuring
The stirrer is automatically released in its top position after 60 (5 + 55) seconds and is allowed to fall down under its own weight.

The end users of wheat, rye and barley suffer when the grain is sprout damaged, and need to monitor the ingredients they buy. To prevent sprout damaged grain from entering the production chain, farmers and grain receivals should test the grain during harvest, and when it’s delivered.

Follow the links in the menu to the right, and read more about the benefits of Falling Number® testing in grain trade, flour milling and more.